Whistleblower and Former Georgia State Senator Nancy Schaefer sacrificed dearly for her efforts to protect children and families. She fought hard to expose the corruption that goes on in Local DSS Offices, in particular the part of those most commonly known as Child Protective Services or CPS. While for the most part CPS has a bad rep for apparently taking children out of homes that were not unsafe, they are absolutely necessary in cases where children are abused by their parents or other family members. All parents who have had their children taken away will say, to the charges of abuse, that they are innocent, but keep in mind, so will all prisoners in jail. No matter how you look at it – some have to be guilty.

That being said, if a child is taken from a home that is safe, for the purposes of garnering federal funding, this amounts to fraud. And fraud perpetrated against children and families can not and should not be tolerated by members of this or any other civilized society! Some may argue that a society that allows this to go on is by no means civilized.

Child Protective Services is Funded by the Federal Government

Child Protective Services is funded by the federal government through Title IV of the Social Security Act and is under the purview of the Department of Health and Human Services. This legislation was signed into law to provide states with the money needed to help children and families in need, and was in no way intended to be subject to the fraud, waste and abuse it is often associated with today. Many local DSS Offices in counties throughout the United States consider Title IV to be a great big honey pot they can just reach into and steal from any time they’d like, at the expense of families and taxpayers. This just isn’t so! An example of the United States Government not standing for such fraud and abuse of funding tied in with child protective services is the case of Bracha Graber, a NYC CPS Worker who blew the whistle on her office for strategically falsifying paperwork pertaining to work done with children and families.

After interviewing countless families tied up in the family court system, Senator Schaefer wrote a report on the waste and corruption she encountered through her investigation. Nancy Schaefer’s report is a testament to all those families who have suffered, unjustly, at the hands of CPS workers and family court judges. Once again, this is not to say that all parents are good and that all CPS workers are evil – they aren’t. It’s the bad ones that ruin it for the rest. And those bad ones should be prosecuted to the fullest extent of the law for the harm they have done to the children and families they were supposed to protect.

CLICK ON THE IMAGE BELOW TO SEE FULL REPORT 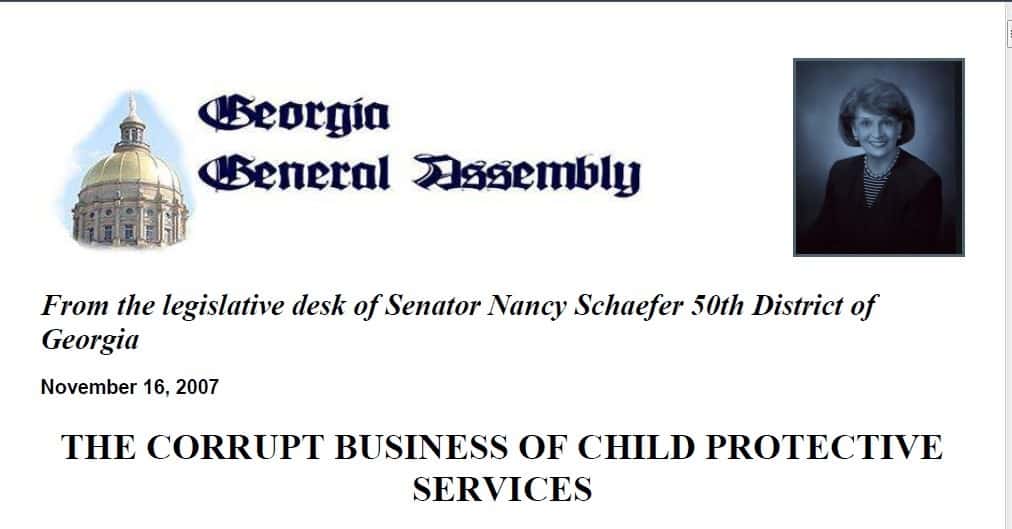